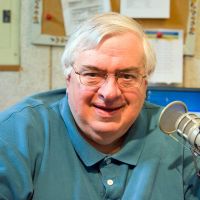 Born in Erie, Pennsylvania on May 24, 1949. Lived most of my childhood on the beaches of Presque Isle and ‘spinning the hits’ at radio stations including the one I built in my basement. The broadcast range was only a few blocks but I kept the neighbors entertained. I had my first paying radio job at WJET.

In 1967 I joined the Navy to be a photographer in 1967 only to find myself as a Seabee going to Vietnam. After serving in Quang Tri and Dong Ha with CBMU 301 and building an Armed Forces Radio station in Quang Tri, I was transferred to Alaska. I spent three years in the frozen tundra of Adak Island at AFRTS as a disc jockey, program director, TV newscaster and movie host.

After discharge from the Navy I returned to Erie to work on radio and attended Mercyhurst College. I left college to take a full-time position at a 5,000-watt radio station as the wild-and-wacky morning announcer. I lived three years in the Upper Peninsula of Michigan near Mackinac Island. Moved back to Pennsylvania and spent 13 years as a morning man in Franklin, PA.

Moved to Pittsburgh in 1989 and I was a freelance Videographer, TV producer. I returned to finish my Bachelors degree in Communications at Duquesne in 1995. I worked at WDUQ as a part-time host for jazz, I completed my MS in Multimedia Technology at Duquesne. In February 2009 I completed my Ph.D. in Rhetoric with a dissertation on how Vietnam veterans are using technology to take private memory and make it public.

I have won 12 Telly Awards, one for a program called “Pennsylvania Adventures”, “A Journey of Faith” a documentary on the town and people of Medjugorje, a documentary on the visit of the Pope John Paul to the United States. I also was awarded Tellys for documentaries on John Gibson of the Negro baseball league, “We are All Immigrants”, “The Seabees Return to Vietnam”, also awarded a Pixie Award for animation.

I continue enjoying photography and my radio roots playing the music of the 60s, 70s, and 80s

Up to date weather for Sarasota